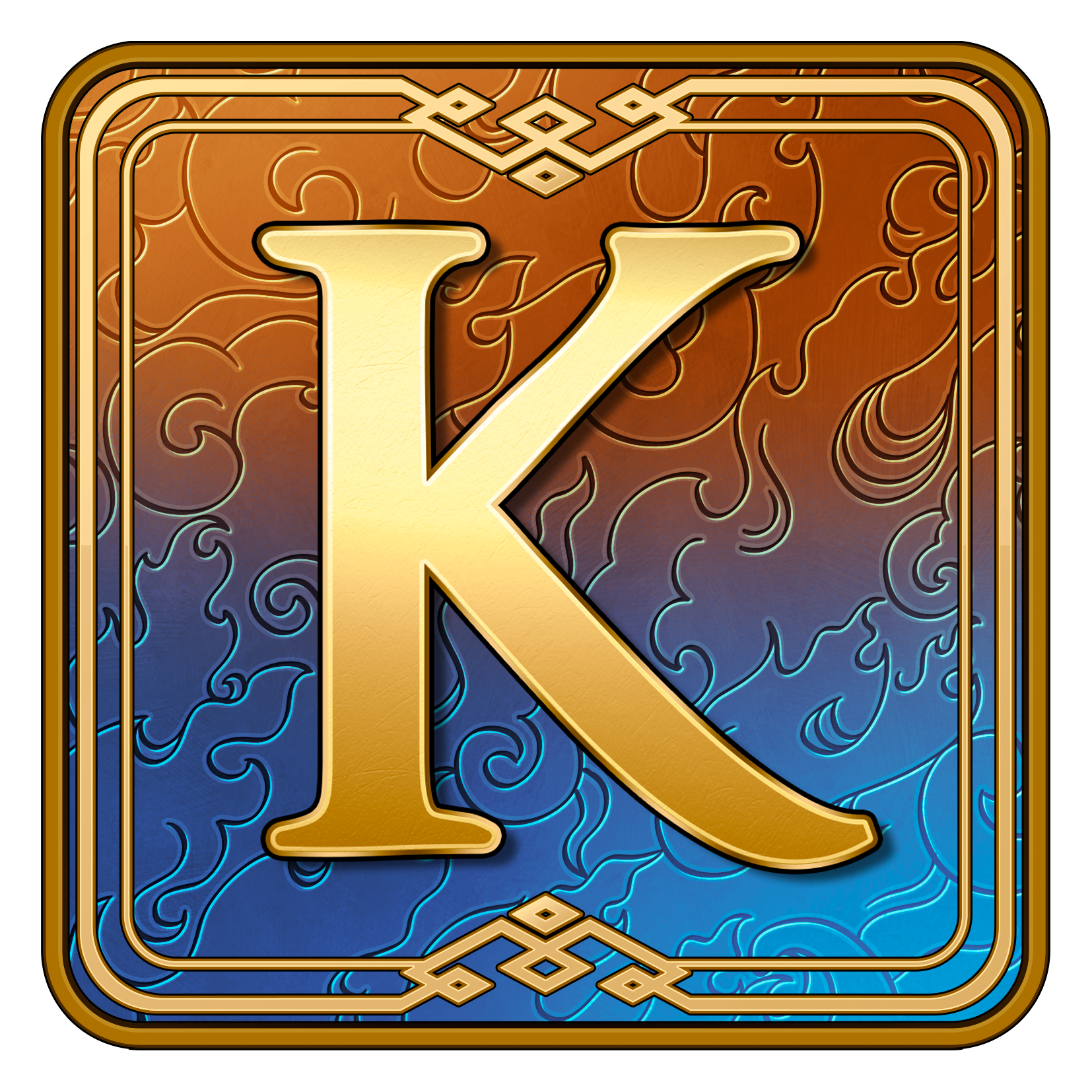 THE MYTHOLOGY OF THE KAIJIN UNIVERSE

I. Shifuku – Age of Bliss

In the beginning there was darkness.

Darkness in which Goddess Yuna had felt safe and comfortable for thousands and thousands of years. Darkness that enveloped everything. Her body. So black that it absorbed everything. Some would call it nothingness, but it was more than that. It was darkness in its purest form. It was everything and nothing at the same time. Infinite silence. Infinite beauty.

Yuna was content, but not happy. Her existence was beautiful, but not perfect. She felt lonely after all these millennia. So she created Taiyo, who was the light, so that she would no longer have to be alone. She always enjoyed the sight of him. And although he was the complete opposite of Yuna, they harmonized and enjoyed each other’s company. Thus was born an age of love and bliss. This time would henceforth be known as Shifuku, the birth of the universe.

For from the love between Yuna and Taiyo during this time, a total of five children were born. Their first child was Mizu (water). She was blessed with beauty and was dearly loved by her mother. However, Taiyo desired a son and could never give Mizu the love that he could have given a male offspring.

The second child was Kuki (air). She too enjoyed much affection from her mother. She was as wonderful as her sister, but Taiyo was not fond of her either.

With the third child, Taiyo was very hopeful of finally having a son. But again, none was granted to him. Yuka (Earth) was the third daughter of Yuna and her great pride, but at the same time Taiyo’s greatest disappointment.

The three children grew up quickly and they loved to get their mother’s attention. Each was constantly trying to outdo the other two sisters in order to gain Yuna’s favor.

Yuka started with small lumps and eventually created large mountains until she could finally form entire planets. Her mother was very proud of her and praised her a lot. Yuka had created something that Yuna had never seen before. This made her sister Kuki so jealous that in her hatred she blew all the planets out into infinity. Yuka’s artwork was flung in all directions of darkness. This made Yuka very sad and so she sought advice from her sister Mizu.

Mizu recommended that Yuka go to her father with her grief and demand a just punishment for Kuki. Skeptical, Yuka followed her sister’s advice, but Taiyo laughed at her. He mocked all three sisters, saying they were weak and pathetic. They should not torment him any longer.

This broke the hearts of the three and they turned away from Taiyo. Yuka and Kuki reconciled and so all the sisters, without saying a word to their mother, left together for infinity. They could no longer bear their father’s dislike and disappointment.

Yuna missed her daughters very much and could not explain what had happened. Taiyo, however, left this cold and continued to plan on his male offspring.
In all her sadness, Yuna once again gave herself to Taiyo and eventually bore him two sons.

The twins Moyasu (fire) and Raito (lightning) were Taiyo’s pride and joy. His greatest dream finally came true. His sons were strong and wild, noble and bright. Completely after his taste. Taiyo was finally completely happy.

But Yuna missed her daughters more than ever and withdrew. Her continued sadness made Taiyo angry, and so in his resentment he finally told her what had happened.

He told her that Yuka came to him asking for punishment for Mizu, and that he answered her with mockery and scorn. But now, he said, all was well, as Yuna finally gave him his two beloved sons. He even regretted what he had done because he was full of resentment then that he no longer held now. In fact, with Moyasu and Raito, something else was born: Taiyo’s compassion. He suddenly understood how Yuna felt.

But this act made Yuna tremendously angry. She banished Taiyo for all eternity. It was only thanks to the love of his sons that she did not destroy him completely.

However, the age of bliss was over and a completely new era began.

Yuna had never been driven by so many emotions at once. She was angry, sad and worried about her daughters. Together with Moyasu and Raito, she wandered around in search of her three beloved girls. As a result, the darkness grew and spread to every corner of infinity.

In their search, they sometimes encountered the planets created by Yuka. But this only made Yuna sadder and her tears fell down on them, destroying some planets so that only dust remained of them.

Taiyo also fell into deep sorrow. He felt incomplete without his sons and Yuna. He was very sorry for what he had done, so he too went on a quest to apologize to everyone for his disgrace and to ask for forgiveness. But it was hopeless. He could not find them. Everywhere he went, the darkness disappeared.

Taiyo was desperate and formed bundled balls of light from his own body with all his power and placed them everywhere in the void, perhaps to get Yuna’s attention again. He hoped that if he just scattered enough bundled light, they would forgive him.

For ten thousand years Taiyo went about creating millions of bright balls of light that would henceforth be known as hoshi (stars). However, even though Yuna could see them, her hatred for Taiyo grew even more, as she thought the Hoshi were an attempt by Taiyo to get his sons back and take them from her.

Meanwhile, the sisters found a planet they liked and settled on it. They began to play and create a place according to their ideas. They named this world Nobu.
Yuka formed hills, mountains and wide plains. She let grass, scrub and trees grow on it. Mizu filled ugly craters and bumps with clear water. And Kuki brought a little movement into the landscape with her breath. They formed the first animals from earth and water, feasting on the beauty of their creation and enjoying not having to please anyone or beg for attention.

After a long time of searching, Yuna finally found her daughters. She was happy to see them again after such a long time. So all five siblings met for the first time. But Yuna could not stay. She simply had no place on this planet. So she promised to always watch over her children as long as they played in peace.

Moyasu and Raito were fascinated by their sisters’ toys and enjoyed destroying them. They burned vast meadows and forests, dried up entire oceans, and created gigantic deserts in the process.

But the sisters did not let their fun be spoiled that easily and created the first kami, also called elemental spirits or nature spirits. Mizu created the Kaito (water spirits), Yuka the Rikuto (earth spirits) and Kuki the Ayumi (air spirits). This impressed their brothers and so they did the same. Moyasu created the Nori (fire spirits) and Raito the Taiki (lightning spirits).

The siblings used the elemental spirits like pieces on a chessboard and so the very first war of the tides broke out.

All the elements fought for supremacy and sole dominance on Nobu, so that Yuna could recognize and proudly look at each child’s strength.

But from a fun game, soon became bitter serious. For the brothers allied and destroyed almost all the kami of their sisters, so that Kuki and Yuka soon lost their desire and in their anger fled to another planet to create their own world according to their ideas in peace.

Only Mizu managed to stand up to her two brothers and continue to defy them. Against their strong element, the water, Moyasu and Raito had no chance. But they could no longer give up, because Taiyo, their father, had also finally found them. They had to defeat the last sister by all means and prove to their creator that they were stronger than their mother’s firstborn child.

But Mizu fought on relentlessly to show her parents that she was the strongest of her clan. And so the war continued.

IV. Kami no Senso – War of the Gods

For many thousands of years, a fierce war raged between the three siblings on Nobu. None wanted to give up. None could afford a mistake. And so the planet also suffered greatly under the influence of the elements. There were hardly any beautiful meadows. Hardly mountains and trees. Nobu consisted partly of raging waters with gigantic waves and partly of dry deserts, hot stone and glowing lava.

Many kami died on all sides until one day Mizu managed to defeat all of Raito’s taiki, halving the number of opponents.

Raito could not bear this disgrace in front of his father and killed himself. This broke Taiyo’s heart and he shone brighter than ever, so he scared Yuna away from Nabu. He blamed her alone for the fact that her children were vying for her attention and now a scion was taking his own life because of it.

But Yuna, who had ignored Taiyo for some time out of love for her children, saw the blame for her son’s death solely on Taiyo. If he had not come, as she had actually forbidden him to do, Raito would still be alive and playing with his siblings. Gigantic hatred grew inside her. A deep resentment that she could no longer stop sprang from Yuna’s very last child. His name was Takuma.

Yuna cut off one of her arms and gave it to Takuma as a farewell gift, settling on Nobu to wreak vengeance and chaos. After that, Yuna left everyone forever.

Takuma was evil. He was hatred, frustration, baseness and lust for death all rolled into one. He wanted to destroy Mizu, Moyasu and their elemental spirits forever. So he went in search of them and wherever he went, there was total darkness. Only Taiyo’s light could stop him.

So Taiyo made it his mission to protect his two children on Nobu from Takuma and wherever he appeared, Taiyo’s light came to the rescue.

But Takuma would never give up. So he created gigantic creatures, which he christened Kaiju and which could also stay in the light. Little by little, the Kaiju defeated the nature spirits of the two siblings and so they had to come up with something quickly.

V. Kaijin – Origin of the Legend

The Kaiju were raging on Nobu and Mizu, and Moyasu had to think of something quickly so they wouldn’t lose all the Kami. Only a handful of Kami were left on each side.

Together they created the idea of flesh beings to face the kaiju in battle and destroy them.

Moyasu created beings out of fire and rock and Mizu formed them out of water and air. They called them Kaijin. But the Kaiju were huge monsters and the Kaijin were far too small to take them on alone. So they used all their energy to create as many of them as possible. They divided them into tribes and gave each tribe special abilities with which they could stop the Kaiju and maybe even Takuma at some point.

Get Started with the Kaijin Universe Newsletter

All important information at a glance:

Any questions? Join our discord and meet the community!

All important information at a glance:

Any questions? Join our discord and meet the community!